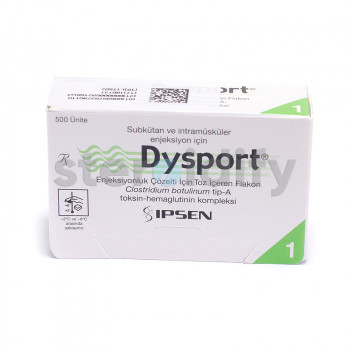 Dysport contains the substance called botulinum toxin type A as its active ingredient. Inactive ingredients of Dysport include human albumin, lactose and protein from cow’s milk.

Dysport was originally developed for the treatment of neurological and ophthalmic conditions in the early 1990s in the United Kingdom and has established clinical success. Patients with excessive sweating under the armpits (axillary hyperhidrosis) are also treated with this product.

Dysport contains substance called botulinum toxin type A that relaxes the muscle. Botulinum toxin is derived from Clostridium botulinum bacteria that intercept the discharge of acetylcholine from the nerve endings that causes the contraction of muscles.

For the improvement of the appearance of glabellar lines, Dysport temporarily impede the tightening of muscles found between the eyebrows for about 4 months.

Dysport works in two functions, which is by inhibiting the release of acetylcholine and at the same time blocks the neuromuscular activity.

Dysport is indicated for the treatment of the following conditions specifically indicated in the medication guide:

Dysport 500IU? is also prescribed for the medication of the following condition:

Dysport is administered through intramuscular injection on the affected muscles. It should be performed by a health care provider who is trained and has the skill of identifying the essential attributes of muscles.

For the treatment of cervical Dystonia: Dysport is administered with the initial divided dose of Dysport 500IU? given through intramuscular injection in affected muscles. Depending upon the result of treatment and patient’s response to medication, Dysport may be administered every 12-16 weeks or as prescribed by Doctor with a dosage between 250 to 1000 units.

For the improvement of Glabellar lines: Dysport is administered intramuscularly in the affected muscles not exceeding the total dose of 50 Units, divided in 10 aliquot units or for 5 equal dosages.

Intervals or frequency for re-treatment must not transpire less than 3 months (12 weeks) following the previous injection or administration.

Dysport is contraindicated to persons who have an allergic reaction to any Dysport ingredients. It is important to inform your Doctor if you have either an infection on the possible site for injection or are allergic to the following substance:

Persons who have the following symptoms or conditions are advised to tell your Doctor of your concern and the possible effect of Dysport on your current condition:

Dysport and Breastfeeding. It is not known whether Dysport passes in to breast milk. It is however important to inform your Doctor if you are breast feeding a baby to avoid harm to the nursing infant.

Dysport and Pregnancy. FDA classified Dysport under the C category for pregnancy. Dysport should be used with caution on pregnant women, as such; benefits should exceed the risk that is involved in the use of this medication.

Dysport may cause muscle weakness and must not be taken by persons who are operating machinery or driving a vehicle.

Dysport is generally not recommended to patients under 18 years old.

Moderate or less serious side effects: The following side effects will diminish after couple of hours:

It is important to inform your doctor right away if you have any discomfort or unnatural occurrence in your present condition.

Drug interactions will normally affect the efficacy of the treatment. There is no solid study that is conducted on the possible interaction of Dysport to certain medication.

The following treatment that interferes with neuromuscular transmission may affect the efficacy of Dysport:

It is however important to inform your medical practitioner of any medication you are currently taking for him to have a complete assessment of its possible interaction with Dysport. $28.00
Back to top
PRICE LIST ABOUT US
NEWS ARTICLES
LAB TESTS BITCOIN